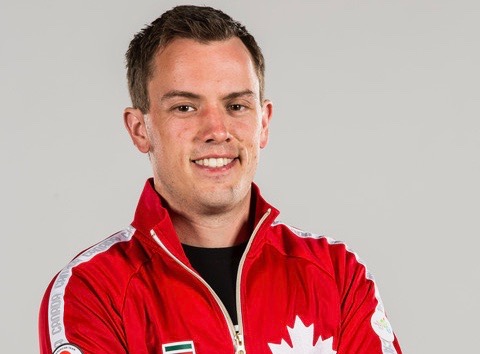 Landeryou is looking forward to his future outside of sport, but also expresses some sadness. “While I recognize it’s the right time to move on, I do so with a heavy heart,” said Landeryou. “There have been very few experiences in my life more enjoyable than those I’ve had through my career with racquetball.”

“I leave this sport much like turning the page of a new book chapter; with the mix of emotions one would expect when departing one profoundly meaningful venture for another. I am deeply saddened to no longer be a part of this sport the way that I once was, but the sadness is overridden by excitement when thinking of what the new chapter might hold, and an urgency to keep reading. To keep turning pages.”

Landeryou first came to the sport as a junior athlete at age 9, and was a key contributor to Team Saskatchewan’s historic winning record at the junior national level. A highlight of his junior career included back-to-back 18 & U boy’s singles championship titles at the Junior Canadian Championships.

Loren Prentice, Landeryou’s personal and national team coach said, “I’ve enjoyed working with Tim over the years. He’s had his fair share of challenges and injuries but has worked continuously to deal with those issues. He has always loved to compete and it certainly has been a fun ride over the years developing yearly plans and strategies for events both national and international.”

In regards to Landeryou’s skills, Prentice said, “Tim enjoyed the strategic side of racquetball. As a young junior, he would often change strategies that were working just because he enjoyed playing different serves and shots. As the years went by, Tim continued to grow on the strategic side, hitting a wide variety of serves and moving his opponents around during the rally, but he also developed the skills needed to kill balls from a variety of heights. He wasn’t a power player but was certainly one of the best shooters.”

At the elite national level, Landeryou had his first Canadian Championship podium finish in 2006, winning bronze in men’s open singles. In total, he has won 17 medals in Men’s Open Singles and Doubles at the Canadian Championships. Tim consistently finished in the top 3 at National Team Selection Events over the last 10 years, winning two titles along the way in 2013 and 2016.

Landeryou also competed on the International Racquetball Tour. He was ranked as the 16thplayer on the tour during the 2014-2015 season.

Mike Green, another of Canada’s celebrated national team members competed with and against Landeryou. “Tim was one of the purest shooters of the racquetball that Canadian Racquetball has ever seen. This proved to be a haunting thought for me and at the same time a blessing,” said Green. “Fortunately for me I was lucky enough to be partnered with Tim on a few occasions representing our National Team including a victory at the Pan American Championships in Tim’s first tournament as a national team member. We also made our way to one final at the World Championships in Korea and no doubt his shot making played a critical role. He is perhaps the best player to come out of Saskatchewan. Congrats on a great career Tim.”

On top of all that Landeryou has given to the sport as an athlete, he has also contributed as an official, refereeing at two international events prior to becoming a national team athlete. He has remained active in this area through the development and mentoring of other officials.

Jennifer Saunders, Racquetball Canada’s High Performance Director appreciates what Landeryou has given to the sport. “On behalf of Racquetball Canada I want to congratulate Tim on his retirement from our team and competitive racquetball,” said Saunders. “Tim has been an integral part of our international successes over the past 10 plus years including winning a gold medal in his first international appearance. I also want to thank Tim for his commitment to our program and I look forward to seeing his future contributions to our sport.”

Saunders added, “On a personal note, Tim was a great teammate; always supportive of everyone, contributing to the best of his abilities and bringing a positive, calming attitude to the team. I wish him and his family all the best moving forward.”

Landeryou will continue to make his home in Saskatoon with his wife Kaitlyn and their two children: Lilia and Archer. He currently works as an Investment Advisor at Landeryou Financial, a family-run, personal finance firm.

Click here to view Tim Landeryou’s full athlete biography. Tim has posted a video message on Facebook that can be found at this link. It will also be shared on Racquetball Canada’s Facebook page.