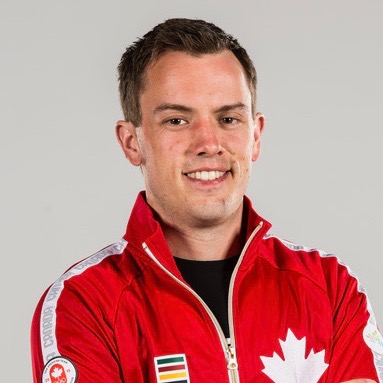 Tim Landeryou’s first appearance with Team Canada at the international level was at the 2010 Pan Am championships where he won a gold medal in the men’s doubles event with Mike Green. Landeryou has gone on to compete for Team Canada at thirteen other international events including the World Championships, Pan Am Games, World Games and Pan Am Championships. Landeryou medaled at both the 2011 and 2015 Pan Am Games and has four World Championship podium results and has been on the podium at the Pan Am Championships three times. Landeryou also had a history of success at the national level in both singles and doubles. He was on the podium 17 times at the Canadian Championships in open events, winning a total of 6 silver medals and 11 bronze medals in singles and doubles events combined. Landeryou retired from national team competition in August, 2020.

Start in Racquetball:  My family moved from Barrie, ON to Saskatoon in 1993. I had just begun playing squash and was enjoying myself so naturally my parents wanted to find me a place to play in Saskatoon. It was only a matter of time before I tried racquetball and I fell in love instantly. I continued to play squash for most of my junior career but once I started making the Junior National Racquetball Team, I focused more on racquetball, although I still play about once a week for cross-training.

Reason for playing:   The speed and strategy are the two top reasons for me. Squash and tennis are fun but the opportunities to rip the ball and hit outright winners are much more abundant in racquetball. This was my favourite part of the game when I was younger. As I matured I found myself enjoying the tactical aspects of the game more and more. Having a clear serving strategy for example, is a lot more important in racquetball than in any other racquet sport I’ve played. It makes the sport very unique.

Training habits:  Being lazy? Haha! I do find training extremely difficult. I’m not one of those players that loves to train but I do it because I love to compete, or rather I love to win. I’m a much more cerebral player so I’m always reassessing the way I do things and thinking about how I can minimize the weaknesses in my game while exposing and taking advantage of the weaknesses in other players’ games.

Best Racquetball Memory:  2010 was a great year for me. It was my first year making the traveling team and I was fortunate to compete in both the Pan Am Championships (Honduras) as well as the World Championships (Korea).  Without a doubt Honduras was the highlight, not just because Mike Green and I won the doubles but also because it was my first event. My coach Loren Prentice was there supporting me and my good friend Brandi Jacobson-Prentice had also made the team that year. It was just a fantastic atmosphere and we came away with gold! It’s gonna be hard to top that one.

Non Racquetball Talent:  I can tie a cherry stem in a knot using my mouth 🙂

When you are not playing Racquetball you are probably: I enjoy playing squash, tennis, and golf. In my downtime I love to read books, watch movies, and play video games and every once in awhile I like to go out and party but these days I’m just as happy to stay in with a good card/board game like Bohnanza or Settlers of Catan (with wine and good company of course!).

What is something that people might not know about you or find surprising? I thoroughly enjoy writing and am a bit of wine aficionado. I have somewhat delusional aspirations of becoming an author/sommelier…

What advise do you have for athletes who want to play at your level? Have a plan/goals and make sure you are taking a holistic approach to your training. A lot of players focus too much on one or two areas and are deficient in others (especially the mental/tactical side!). This leaves them weak in a less obvious way and they lose matches because of it.

Who has been important in your development as an athlete? Loren Prentice has been my coach since I started playing racquetball. He introduced me to the game and ensured I had fun. He fed my competitive drive and helped me develop my skills through my junior career, has been my eyes outside the court and sounding board into my senior career, and still comes out for organized practice after 20 years. He’s been a phenomenal mentor and role model and I wouldn’t be the same player without him.