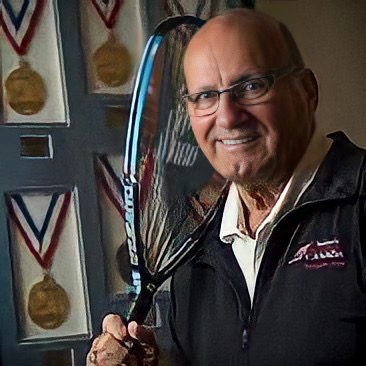 Jack McBride has made a significant impact on the sport at the local, provincial, national and international level. By being integral to any volunteer activity he has been involved with, he has helped build and strengthen organizations at all levels of the sport. Even at age 84 he still lives and breathes racquetball.

From 2012 to 2016 Jack served as Canada’s representative and as the Regional Vice President with the International Racquetball Federation (IRF). He was an important advocate for North America on the IRF Board, but he also promoted his vision for the development of the sport globally. Jack served on the Pan American Racquetball Confederation Board of Directors in 2018.

During Jack’s tenure as President, he carved out significant time to contribute as the Host Chair of two major international tournaments. The 2014 World Championships was the first international event hosted in Canada in many years with 22 nations competing in a well-run event that set the stage for the Toronto 2015 Pan Am Games the following year. The Racquetball event at the Pan Am Games was an immense success, showcasing our sport to the world and providing an opportunity for Canadian athletes to experience glory at home. Jack spent countless hours over a two-year period, working with Toronto 2015 and the International Racquetball Federation to make these two events the success that they were.

As a true champion of racquetball, Jack has always led by example. Although sidelined from competition at this time, Jack’s love of the game is hard to match, and he has inspired many to stay actively playing well into their senior years. As an unwavering competitor for life, Jack holds many provincial, national and international titles. Twice, at ages 75 and 80, Jack captured the “McBride Hat Trick” or the “Triple Crown”, winning titles at the National Championships, the US Open and the World Senior Championships.

As Jack began to step away from governance roles, he wanted to leave another legacy, which was the establishment of the Racquetball Canada Hall of Fame. He spearheaded the task force that developed the policies and framework and sat as the chair of the Selection Committee. It is only fitting that Jack is being honoured as a member of the Class of 2022 in the Hall of Fame.