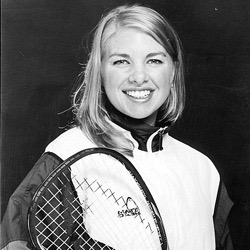 Throughout her junior and elite career Christie (Van Hees) Huczek had an impact on the sport of racquetball in Canada and internationally.

Huczek began playing racquetball at the age of five and won her first tournament at age six when she competed at the USA Racquetball Junior National Championships. Huczek went on to represent Canada at several Junior World Championships, winning three gold medals during that time.

The year after advancing from the junior ranks, Huczek qualified to represent Canada at the Pan Am Championships and the World Championships, where she won bronze in singles and contributed to the silver medal result in the Women’s and Overall Team events.

Throughout her playing history Huczek represented Canada at eleven international tournaments, winning at least one medal at every event. Highlights of her international career include winning the World Championship title in women’s singles in 1986 and contributing to Canada’s gold medal win in the Overall Team event, which was the first and last time Canada has achieved that result. Huczek represented Canada at two Pan Am Games, with a silver medal podium result at each Games.

Huczek also had significant achievements at the US Open, winning the Women’s Open Singles event four times and finishing second three times.  She was also very active on the women’s pro-tour and was ranked in the top five in singles for five seasons. In the 2004/2005 season, Huczek was the top ranked singles athlete on the tour.

Huczek left a legacy beyond her athletic achievements. In Canada, she was active in mentoring younger athletes in achieving their goals. As well, she was chosen by Sport Canada to work with young girls in Barbados, encouraging them to pursue sport.

Huczek was inducted in the Central Okanagan Sports Hall of Fame in 2015. She also was the recipient of the Racquetball Canada’s Women’s Award in 1999.

Huczek retired from the sport in 2010.

Click here to read Christie Huczek’s acceptance remarks from her induction into the Hall of Fame.